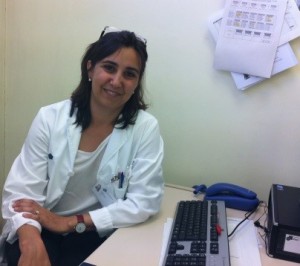 [/vc_column]
[vc_column width=”4/5″]
Dr. Pontes is physician, medical specialist in Clinical Pharmacology, and holds a PhD in medicine since 2004. Her PhD project developed in pharmacoepidemiology, investigating the risk of colorectal cancer associated to drugs. For 15 years Dr Pontes has been working in several positions in the pharmaceutical industry, within the R&D area, both in Spanish medium-sized companies and in a multinational company.

She has been focused on early clinical research with NCE in immunology, dermatology and cardiovascular fields, and she has been involved in clinical development planning and execution, especially from first administration in man to proof of concept, being in charge of clinical trial design, management and reporting of study results. She has held a number of positions as Project Manager, Head of Clinical Pharmacology Department, Head of Regulatory and Clinical Research, and also as member of the Company Executive Board. For a 18 months period between 2004 and 2006 she also developed activities in pharmacovigilance and pharmaco-epidemiology as Senior Scientist, based in Egham (UK).

On January 2011 she joined the Hospital de Sabadell – Parc Taulí, where she currently leads the Clinical Pharmacology Unit, and is associate professor of Pharmacology and Clinical Pharmacology at the Universitat Autònoma de Barcelona. Her main ativities at the Hospital include methodological support to independent researchers, pharmacovigilance, drug information and drug selection activities, and is member of the Ethic’s Committee and of the Pharmaco-Therapeutics Commitee since 2011.

Her current research interests include conducting independent trials in routine clinical practice settings, with main focus in inflammatory diseases, and pharmacokinetic-pharmacodynamics of anitmicrobials in critical patients. Also, the development of new methods and designs for clinical trials in rare diseases, subject in which she is part of an FP7 international Project.
[/vc_column][/vc_row]