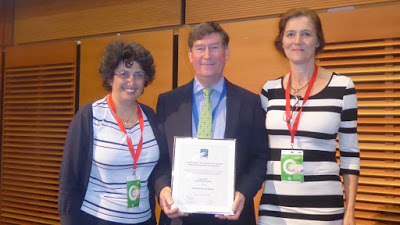 The EACPT 2017 Congress was held in Prague from 24th-27th June with 566 participants from all 5 continents – 28% from beyond the European Region, from Australia to China, Japan and South Korea to the USA. The Congress included 22 sessions with Keynote Lectures on current issues for research, education and clinical practice on safe and effective use of medicines. Almost 500 oral and poster presentations will be presented by delegates from the European Region and around the world.

The EACPT Scientific Award was presented to Professor David Webb, President of the British Pharmacological Society for his 2015 Lancet paper on PATHWAY 2.  This study
reported a significant improvement in blood pressure control in older, overweight patients with poorly controlled hypertension despite combination medical therapy when the mineralocorticoid antagonist spironolactone was added, treatment supported by directly observed therapy.

The EACPT was founded in 1993 and now includes as members all national organisations for clinical pharmacology in Europe, as well as organisations from further afield internationally. The EACPT aims to provide educational and scientific support for the more than 4000 individual professionals interested in clinical pharmacology and therapeutics throughout the European region, with its congresses attended by a global audience. The EACPT also advises policy makers on how the specialty can contribute to human health and wealth.