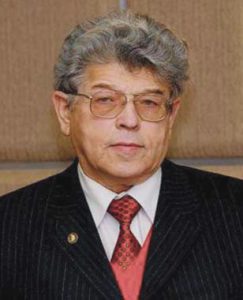 Prof. Vladimir G. Kukes started his professional activities as a medical doctor in far eastern city of Russia — Magadan as a part of obligatory practical studies. After coming back to Moscow he continued his internal medicine studies and became interested in the new filed of clinical pharmacology. He went to listen to the first lectures in clinical pharmacology by professor Votchal in the Russian State Academy of Physicians’ Excellence.

exc. from the nomination letter. You will find the document as a PDF download below.
[/vc_column][/vc_row]

His name is well known and respected in all parts of Russia, he is considered a pioneer and founder of national clinical pharmacology combining brilliant qualities in research, organizational work, teaching.

Vladimir Kukes was born on 8, September 1934 in Leningrad. He is a doctor of medical sciences since 1970, professor since 1974, associate member since 1974 and full member since 1999 of the Russian Academy of Sciences (highest research governing organization in Russia), honored researcher of Russia since 1995, head of the department of clinical pharmacology and introduction into internal diseases at the 1a Moscow Medical State University n.a. I.M.Sechenov, director of the Center of clinical pharmacology of the Ministry of Health.

After graduation from the 15t Moscow Medical University in 1957 he started his professional activities as a medical doctor in far eastern city of Russia — Magadan as a part of obligatory practical studies. After coming back to Moscow he continued his internal medicine studies and became interested in the new filed of clinical pharmacology. He went to listen to the first lectures in clinical pharmacology by professor Votchal in the Russian State Academy of Physicians’ Excellence.

He was a principal mentor in 25 doctoral (highest scientific degree in Russia) and over 113 candidate of medical sciences (relative equivalent of PhD) dissertations. His students have formed currently active brilliant society of specialists in clinical pharmacology, they are professors of clinical pharmacology in various medical universities in Russia and abroad, who in turn they are mentors for over 50 candidate of medical sciences and 10 doctoral dissertations in clinical pharmacology. Former students of professor Kukes work not only in all parts of Russia, but in other countries of the Commonwealth of Independent States, China, Taiwan, Iran, Morocco.

His main research projects have been bridging fundamental science and clinical practice. He was the first scientist in Russia to promote concept of personalized medicine combining studies of pharmacokinetics, pharmacogenetics, therapeutic and adverse effects.

He has developed many methods of measurement of drug concentrations in biological fluids, provided evidence for performing relevant tests to predict individual response to medications. He was the first to initiate research projects in drug metabolism and biorhythms in relation to drug effects, developed methods of geno- and phenotyping of biotransformation enzymes and drug transporters, studied their clinical significance, drug-drug and drug-food interactions.

Professor Kukes is still actively promoting concept of personalized medicine — pharmacogenetic testing, evaluation of P450 enzymes activity and drug transporters in clinical practice to provide personalized use of drugs especially in the treatment of most relevant diseases. He is leading research projects in search of drugs modulating activity of the enzymes and transporters. He also paid attention to the ethnical minorities, and initiated research projects studying pharmacogenetics in populations of separated areas of Russia so that they could benefit from personalized medical treatments. He developed new algorithms of pharmacogenetic testing and their implementation in clinical practice, which lead to rather wide spread of these types of testing provided for many patients in Russia by clinical pharmacologists, and promoted concept of personalized medicine.

Professor Kukes has made a lot in development of national pharmaceutical industry as well. He participated in the development of several drugs and wrote national guidelines for quality of preclinical and clinical studies.

Professor Kukes has published over 400 research papers mostly in Russian, but also in international journals. He has published 21 monographs, 52 guidelines and textbooks for students and doctors, he is an author of 16 patented inventions. His textbooks have survived more than 8 editions and are translated into Spanish and Kazakh languages.

He has many professional governmental awards and medals for his achievements in establishments and development of clinical pharmacology in Russia.

He successfully negotiated with governments as a director of the Center of clinical pharmacology at the Research Center of Expertise of Medical Devices and Medicines, Ministry of Health, member of the national formulary committee as well as a member of the Russian Academy of Medical Sciences, which lead to incorporation of clinical pharmacology in official healthcare, education, and research.

He spread principles and knowledge in clinical pharmacology through extensive research collaboration and education of numerous students from all parts of Russia and abroad.

The all-Russian association of clinical pharmacologists asks you to consider professor Kukesas a worthy candidate for the EACPT lifetime achievement award.